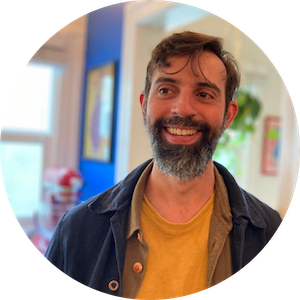 That means writing, directing, and producing them. I really love writing and I do it almost every day. Mostly I write movies now but I like writing other things too.

I like to make comedies that are playful. They are usually one or more of the following: weird, dark, satirical, or absurd.

Here are some of the movies I’ve made.

My last short film, WHAM, screened at the Sidewalk Film Festival, DC Shorts, the Middle Coast Film Festival, and Elevated Films in Chicago. Other films I have made have played in other festivals.

My latest project is An Exquisite Meal, a feature-length dark comedy thriller about a dinner party gone wrong. It premiered at Cinequest 2020 and was released publicly in December 2021.

Before I made movies, I was an actor, mainly interested in improv and sketch (with the occasional foray into stand up). I started in Baltimore with the Baltimore Improv Group and moved to Chicago in 2009 to study at Second City and The Annoyance Theatre.

During my years in Chicago, I wrote hundreds of sketches, plays, and other works for the stage, some of which were produced at The Annoyance Theatre, The Artistic Home, and various other theaters in Chicago.

I left Chicago in August 2019 and to travel for a year, before landing in L.A.

I did not go to film school but I did study Spanish and French at the University of Maryland. I'm half Puerto Rican.

To make money, I do data science and code.

I retired from baseball in 1999. Please don’t ask me about it.